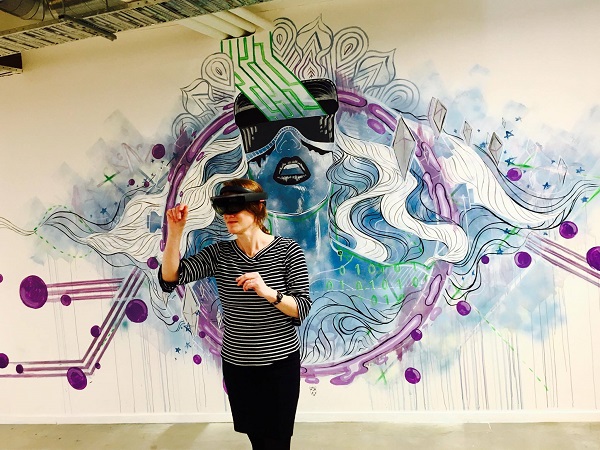 I spent a day there hot-desking and discussing the possibilities of a mixed reality future. I wanted to get an understanding of who is using these technologies already, why they are using them and the potential of augmented reality and virtual reality for SBC to connect with members.

A key learning was that consumers increasingly prefer to use augmented reality over virtual reality. Augmented Reality (AR) enhances the real environment you’re in,with digital input you see through a TV or phone screen – the race lines across the TV screen as Team New Zealand raced Oracle in the  America’s Cup is a good example. Virtual reality (VR) however is full immersion in an imaginary, digital environment– think of a pilot wearing a headset for flight simulation training.

Increasingly,people are choosing the shared experience that augmented reality can offer, over the isolated experience of virtual reality.

Both technologies have fascinating applications and implications. It’s not all about entertainment and the next Pokemon Go – the development of both augmented and virtual reality applications for health and rehabilitation, education and training, and business purposes is growing exponentially. I learnt about a VR application that helps burn victims with their pain, by placing them in an environment covered in snow.

Sure, there was the fun part to it all – watching a dancing, talking, one-inch man through a phone screen pointed at a poster, using a Hololens to shoot lasers at robotic space dogs and donning a Vive helmet to draw a 3D picture using digital smoke – but I was blown away by the range of practical and sophisticated applications already in existence.Within half a day at ProjectR, it was clear that:

So, the applications and user-engagement for augmented reality and (to a lesser extent) virtual reality is only growing one way over the next few years: bigger. With massive potential as a new way for businesses to connect with consumers.

As for how the Sustainable Business Council can apply AR and VR technologies, I wondered how we could use these digital dimensions to visualise project goals and work through scenarios, and how can these technologies could help our members connect with consumers and go further in their sustainability goals.

It’ll take a while to develop good answers to these questions. In the meantime, we’ll keep being a part of the mixed reality network and talk with members about their uptake of these technologies.

Activate the Allies: Sustainability is no longer a ‘role for one’